Take my hand and close your pretty eyes

Just for the record: this is my 60th post 🙂
I’ve got lots to show you, so why don’t we get started…

I’ve received a lovely RAK from the ever-generous Vanessa, isn’t it gorgeous? And we don’t even know each other! Seriously, this is also a reason why I love crafting and blogland so much, because it connects people in such a beautiful way.
Anyway, thank you Vanessa!!

Next up I made a little card for the current Moxie Fab Challenge called “Not your Regular Ruffles”. Hope you like it 🙂 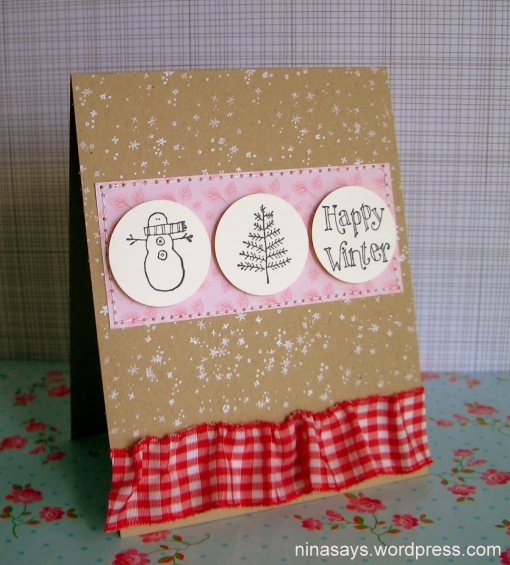 On Thursday some friends and I went to Stuttgart for the opening concert of the new Mando Diao tour. I don’t have the photos yet, but I can tell you that it was SPECTACULAR. The crowd was dancing and jumping and screaming and singing along, the band was fantastic – they played full throttle for over two hours, two encores and a great finale including a shower of glitter. (Everybody was kinda sweaty, so the stuff stuck to us immediately ^^) Natch, on Friday my voice was basically gone and I was super tired 😉 BUT it was totally worth it!
Yay for Mando 🙂

That’s it for now, catch you later!
*= a German supermarket

A conference interpreter (German, English, French), living in Mannheim, Germany and taking an interest in an array of things such as papercrafting, language matters and food. Thanks for taking a look at my blog :)
View all posts by ninasays →

Posted in It's Her Life, Paper Trail

6 responses to “Take my hand and close your pretty eyes”