Yesterday I finally covered the lower part of my couch with the new fabric I bought. It’s striped, so it took quite some time to get everything straight and stapled – but! It’s finished and it looks so cool! I’ve had my old sofa for… oh ages and the pattern was so “90s” (ugh!). Now I just need to figure out how my new / old sewing machine works, then I can finish sewing the upper cover and voilà – my couch will be as good as new! I’ll share a picture when everything’s done 🙂

Now lookit what I got in the mail today… 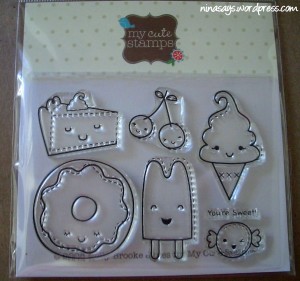 Say “awwwwwwwww” 😉
These are from My Cute Stamps and I think they’re indeed irresistibly cute! Those were also what I had in mind when I made the following card: 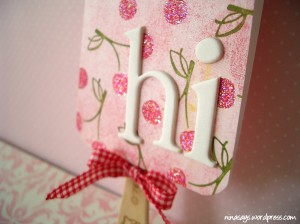 The base is Basic Grey “Two Scoops – Very Berry Sundae”, the cherries are from SU!s Tart & Tangy Set. I inked them up with Real Red and Old Olive markers, stamped them in a random pattern and used glue and Dazzling Diamonds to make them sparkle. My SU! Scallop punch took a bite out of the top right corner (5 out of the top layer, 4 out of the bottom layer to give it some 3D effect). The chipboard letters are Basic Grey as well and the ribbon bow is Stampin’ Up!.

Notice the Hello Kitty popsicle stick? Yep, I had Hello Kitty ice cream that day, then decided that the stick was too cute to simply throw it away. So I thoroughly cleaned it, let it dry and in the meantime made the card 🙂 Whaddya think?

Have a great, sunny day!

P.S. Just to give credit: Popsicle cards were around everywhere last summer, my source of inspiration was Lynn Larson. I stumbled upon the “Sweet Kawaii” set because of the hilarious Krystie Lee and her adorable samples using the set: for example this card, that card and the onesie. She’s super talented, no?